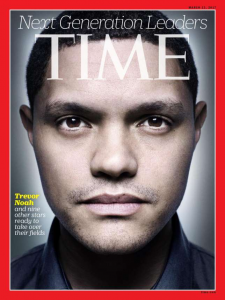 In 2015, Trevor Noah took over from Jon Stewart as the presenter of the Daily Show, a late-night US satirical talk show, and against all odds he has, according to a Time Magazine’s Instagram post, “more than doubled the show’s international reach and has now become the master of the eloquent Trump-takedown.” In 2017, he was named one of TIME’s Next Generation Leaders and is on the magazine’s 2018 list of the 100 most influential people in the world. An outstanding recognition of leadership achievement by world standards!

Growing up in South Africa, during the apartheid era, Noah faced poverty, racism, violence, and crime throughout his childhood years. Instead of becoming a victim of this adversity, he chose to re-frame these challenging life-experiences and use them to give meaning to his life. In an interview in The Guardian  newspaper, he describes how  his family chose love and laughter over bitterness and anger to process their  life experiences and cope with the realities of their situation.

Noah has gone on to use stand-up comedy as a tool to enlighten people across the globe and point out harsh inequalities in society, without having to preach to them.

Through his continuous self-reflection and the authoring of his life-stories– Born a Crime and other stories (Pan Macmillan)- he has developed a solid and strong moral compass which had enabled him to lead with true conviction and authenticity, highlighting injustice and promoting fairness and equality, appearing never to waver in his commitment to creating awareness of issues that have profoundly influenced his life from childhood.

He has described how he stays centred and committed to his leadership purpose and authentic self through daily meditation and self-reflection,” I meditate every morning. I try to centre my mind on my goals, think about what I’m trying to do, and think about how I could do it better. Then I set out into the day with a clearer understanding of my purpose. At night I like to take a moment to decompress and do the opposite. I’ll reassess the day, look at what went wrong, what went right, and why it happened. Then I go to bed with no unresolved thoughts — or as few as possible.”

Authentic leaders find a balance between their intrinsic and extrinsic motivators – Noah has spoken about the freedom of choice that his financial success has brought him but is not solely motivated by this and demonstrates a pervading commitment to his values and leadership purpose in all his work. He appears to be motivated by self – exploration and personal growth as well as to developing others. He believes firmly in discovering and developing the diverse talent of comedians of colour.

I find it quite ironic that Noah, who suffered gross injustice under the South African apartheid regime, now commands a very powerful platform in American Society and is successfully using it to create awareness of the pervasive racial inequalities within American Society, with the purpose of bringing people together through his use of humour and stories from his own experiences. Trevor Noah is without doubt a truly authentic South African leader making a difference in the world, and one whom we as fellow South Africans should be very proud of.